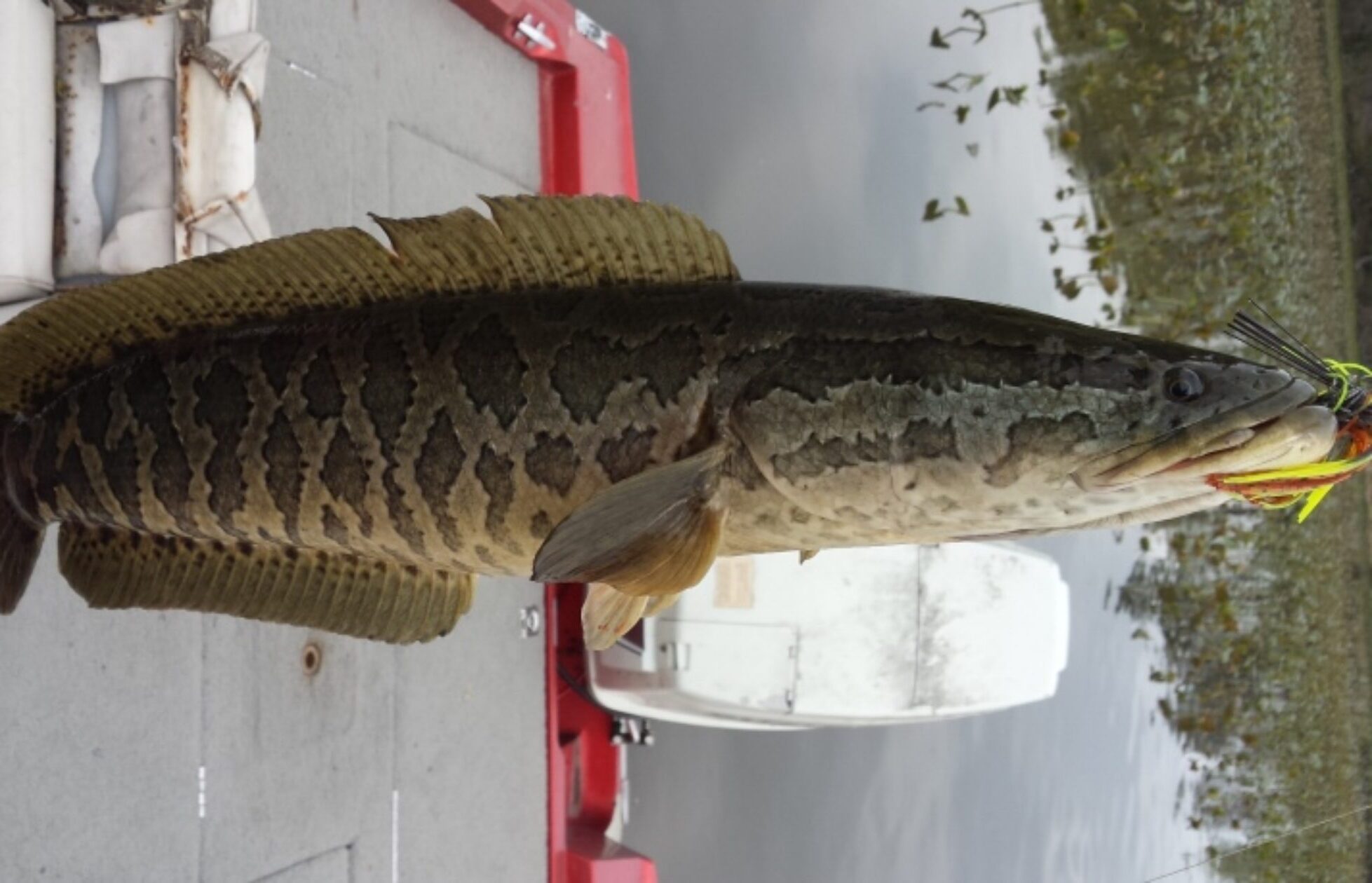 Some Great Days on the Water in July

Now the the heat wave is gone for a while kayaking is the best way to get into the weeds and the back creeks that boats just can’t get to.  Taking  some snakeheads this month 4-6 fish for day which is better than it was during the heat wave!  Darker color frogs are working better than white.   Greens and also working but I have had more on my Red Devil Flipper Frog that I pour (see the “For Sale”) page link for details.  I show them in some of my videos too.

Early morning to noon and 5 to dark seem to be the hottest times on the water for me.  The mid day heat slows things down.  The bass are biting too, nice 3-5 pounders before 10 am and 6-8pm.  Chatterbaits and frogs are working for them nicely.

Snakehads Deep in the  Back End of Potomac Creek

For me this year’s snakehead fishing has been slow but many of my fellow anglers have had really good snakehead catches, 13 and 16 lb fish.  Huge!  When I have of their photos I will post them for you all.  Most days I manage to catch 3 or 4 average fish 20″ to 28″ weighing between 2 and 8 lbs.  The video below has some nice footage of a 2 and 4 pounder,  explosive bites.   The  bass have been biting in the early mornings and just before dark when it cools down.  I have not been out in the “big” river so I can’t say what they are doing there.  I just love the snakehead fishing action and am addicted!  They fight lke a fish twice as big as they are (like bluefish in the surf) so I almost always go for them.

Enjoy the latest videos and post yoru comments here and on my Youtube channel page (click the link here to go to my Youtube channel)  While checking out my videos on Youtube make sure to give them all a complete watch and then a “thumbs up”.  Subscribe if you can as Youtube rates the channels by the number of likes and  subscribers.  I am trying to get a simple channel name but need more “likes” and subscribers.  Thanks in advance!

Well it’s been slow for me at least.  I’ve put in on Potomac Creek, Aquia Creek and the fish bites are far and few between.  Kayaking, Bass Boatin’ and not much to show for it.  Water temps have been around 64 degrees F and the river is muddy brown and fast.  I see fish on the sonar but not many takers, a few bass here and there granted some nice ones, 2-5 lbs. but not many.  Even the snakeheads are not hitting that much a few nice ones before all this rain but the last two trips nothing.  I saw two bug out as I cruised past their “sun bathing” spots last Thursday on Accokeet Creek(off Potomac Creek) but not biters that day.  Fouled hooked this shad one day while I was kayaking fishing way up Potomac Creek but not other bites that day.

What are you guys doing to land some fish?  Any fish any where leave your rainy weather tips.

See you on the water,

If you are into natural health and chiropractic check out my office website, www.Totalchiro.net. I and a Nutritionist and Chiropractor for over 30 years now and still love seeing people get well who failed at other doctor’s offices.

The air temp was up, 77 even with the clouds, the water seemed about 48ish (no thermometer) and it was windy on the water in my kayak.  I only had time to get there on the outgoing tide so I hit it at almost dead low- not the best time on a tidal river!  The water was coffee brown  and the carp were moving up the creek and jumping but no bass or snakeheads.  I fished the deeper channels, the drop-offs and way up the creek in the “small waters” and did not get or see any predatory fish unfortunately.  Some small bait fish in the upper creek in 10″ of water but no big fish.  I was using soft plastics, spinner baits, swim jigs, crawfish deep water jigging but nothing! I even pulled out the top water toad in the shallow water but nada…  I was using mostly white and chartruesse colors but tried some darker purples and black/blue and  nothing.

Oh well it was a nice day  in my kayak and got some good exercise.  Now I have to wait a bit due to my busy chiropractic officed schedule and family committments (like we all do).  But I think it will definately turn in by the beginning of April.

See you next time on the Potomac River!

www.totalchiro.net to check out any healthcare questions.

Well no snakehheads this time of year for sure but the bass fishing has been good on jigs and creature baits  for me.  Crankbaits and swim baits have been slow but then I have not fished as much as some of you this winter I am sure.  Especially with all the warm weather I am sure many of you are killin’ it.

I have a few catfish friends that have done great this winter hitting the James or Potomac Rivers in central Virginia. Jamie caught a 60lb channle catfish on the Potomac River at Leesylvania by the power plant bridge just before Christmas on that 72 degree sunny Saturday- way to go!  (I will get that photo and post it here next week).  What about that new North Carolina state record that went around Facebook, a channel cat weighing in at 105lbs. and the 94lb blue catfish another state record!

So drop a helpful winter tips bass fishing comment below and I will do my best to get it up here soon!